“Larry Schiller is the one who came up with so many of these primal pictures. It was he who broke the story in the first place!” —Tom Wolfe

In 1964, famed writer Ken Kesey and his band of Merry Pranksters set off across America on a “Transcontinental Bus Tour,” headed for the New York World’s Fair. Kesey’s journey, in the company of his Merry Pranksters, lies at the heart of The Electric Kool-Aid Acid Test, an as-if-first-hand account of the group’s antics and ethos by Tom Wolfe, wunderkind of the New Journalism movement.

This Art Edition presents Wolfe’s era-defining text in letterpress, along with facsimile reproductions of his manuscript pages, ephemera of the period, and photographs of the acid scene by Lawrence Schiller and Ted Streshinsky. The accompanying print, The Hollywood Acid Test, February 25, 1966 by Lawrence Schiller, captures a defining event in the LSD craze. While The Grateful Dead provided the live music, Pranksters including Lee Quarnstrom and Mountain Girl curated the movies, “audioptics,” and “stroboscopic ballet machine.”

The costumed revelers dancing into the small hours of the night endures as one of Schiller’s most iconic images from his coverage of the LSD scene. It was the lone color photo reproduced in the best-selling book LSD (1966) and featured on the cover of the Capitol Records LP of the same name and year. Schiller brought his own strobe light to hang high in the rafters so he could shoot the picture at a slow shutter speed, simultaneously capturing the natural light and multiple images under the effect of the strobe. It was three days before he saw the images from that adrenalin-filled night, one of the color frames catching his eye. “This image is alive,” he says. “Nothing else matters.”

Marking the year of original publication, The Electric Kool-Aid Acid Test is limited to 1,968 signed copies. 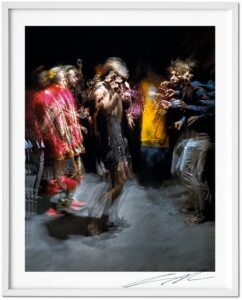