French artist Françoise Gilot, born in 1921, can look back on a long history. As a painter of the Nouvelle École de Paris after the war, her work hovers between abstraction and figuration. She has published a number of books, not just her famous Life with Picasso, in which she recounts her experiences of 10 years at the side of the most famous artist of the 20th century, but also of poetry and stories with her own illustrations.

This fold-out box set presents a hardback, facsimile edition of three sketchbooks made by Gilot on her travels between 1974 and 1981. Collecting direct impressions and abstract reflections, they are suffused with the distinct atmosphere of these places: Venice, India, and Senegal.

Gilot travels to Venice in the summer of 1974. Her regular visits to the floating city as a child have made a lasting impression, and she feels a deep, continued connection. There, she draws with a subtle palette, centered on different shades of a watery blue. Views of the city are mixed with reimaginations of the canals and cityscape, yet it is above all the spirit, history, and myth of Venice that animates her work. She pays tribute to its art with various pages characterizing her forebears: the Bellinis, Carpaccio, Giorgione, Veronese, Titian, Tintoretto. Gilot infuses her illustrations with writing, her beautifully organic lettering becoming part of the drawings in which she depicts the canals, the cafés, the lovers at the water’s edge.

The second sketchbook is from Gilot’s trip to India in late 1979. She draws out on the streets and sat on bumpy plane rides between cities. The sketches, mostly black and white, capture people on the road, market stalls, cows and other animals, as well as wall advertisements for the coming election. Central to the sketchbook are the figures of women, working or carrying a load, always clad in impeccable saris whose folds especially captivate her: “The cloth is a cocoon,” she notes, “and in this latent metamorphosis lies the magic of the curved line.”

In 1981 Gilot visits Senegal, where she is impressed by the people she meets, their movements and meetings, life in the circle huts and on marketplaces. Her sketchbook is almost jewel-like in intense colors, juxtaposed with deep-inked black-and-white line drawings. Again we see many women in flowing garments, their poses like ornaments on the page, we see plants and landscapes, sometimes clear and sometimes as form, moving in and out of abstraction.

This Art Edition includes a signed color lithograph, La Salute, Venice (2017). Especially created by Gilot for TASCHEN, it shows a view of Santa Maria della Salute, not in the style of an Italian veduta but rather depicting a city reimagined. “The good thing about Venice is it’s the city I know best in all Italy,” says Gilot. “I’d been there so often that I’d assimilated it—not just looked at it, but assimilated it.”

The three sketchbooks are accompanied by an additional booklet containing an
introduction by Hans Werner Holzwarth, a conversation between the artist and Thérèse Crémieux on her work and travels, and translations of the handwritten text within the drawings.

Art Edition of 60 numbered copies (No. 1–60), each with the hand-printed four-color lithograph La Salute, Venice (2017), signed by Françoise Gilot

Also available as two other Art Editions, each with a different lithograph signed by Gilot and limited to 60 copies, and as a numbered and limited edition of 5,000 copies 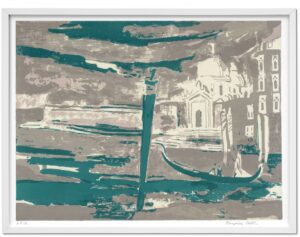