The Art Edition (No. 101–200) is limited to just 100 signed and numbered copies, each with the original pigment print Jodie Foster on the Street, Taxi Driver, New York, 1975, signed by Steve Schapiro

Taxi Driver has long been regarded as a cinematic milestone, and Robert DeNiro’s portrait of a trigger-happy psychopath with a mohawk is widely believed to be one of the greatest performances ever filmed. Time magazine includes the film in its list of 100 Greatest Movies, saying: “The power of Scorsese’s filmmaking grows ever more punishing with the passage of time.” 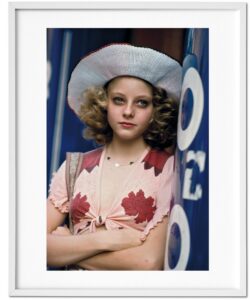