It was no more than eight years after the surrender of the Nazi government when Josef Heinrich Darchinger set out on his photographic journey through the West of a divided Germany. The bombs of World War II had reduced the country’s major cities to deserts of rubble. Yet his pictures show scarcely any signs of the downfall of a civilization. Not that the photographer was manipulating the evidence: he simply recorded what he saw. The country’s economic boom was so incredible that the whole world spoke of an “economic miracle.”

Dated between 1952 and 1967, Darchinger’s pictures, in color and black-and-white, show a country in a fever of reconstruction. Exceptional historic and cultural documents,they reveal a specific German moment, caught between technological modernism and cultural restoration, between increasing affluence and continued penury, between bomb sites and new building, between German Gemütlichkeit and the new threat of the Cold War. Above all, however, they reveal, the ordinary people swept up in this particular period. 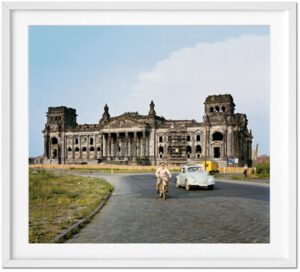