Inez van Lamsweerde and Vinoodh Matadin’s work has graced the walls and pages of some of the world’s finest galleries and fashion magazines. If it is surprising that their photographs easily float between these worlds, it is by virtue of their ease in creating imagery that seeks homes in both culturally elite and mainstream outlets.

For some of their photographs, such as their portrait of Björk or campaign for Givenchy, van Lamsweerde and Matadin have worked in collaboration with the art directors M/M (Paris), who have also designed this sumptuous three-volume retrospective. This edition looks back at “pretty much everything” that the photographers have worked on for over two decades, which has brought them to the forefront in the fields of both art and fashion.

The three-volume set includes over 600 images of Inez and Vinoodh’s oeuvre, alongside interviews and elucidating texts, and an original silk-screened poster, origami-folded over the top corner of the slipcase.

Art Edition limited to 100 signed and numbered copies, each with two pigment prints by Inez van Lamsweerde and Vinoodh Matadin

The designer
M/M (Paris) is an art and design partnership consisting of Mathias Augustyniak and Michael Amzalag. Their portfolio includes art direction and collaborations with Björk, Balenciaga, and Inez van Lamsweerde & Vinoodh Matadin, as well as with magazines including Vogue Paris, Interview, and Purple Fashion. 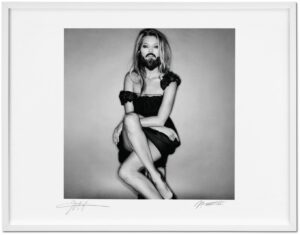