Equal parts erotica, fashion shoot, art monograph, metaphysical mystery, social and cultural archaeology of the French capital, and neo-noir arthouse film—Rose, c’est Paris is the steamy tale of twin sisters, known only as B and Rose, and a third principal—the city itself. An abduction leads to a detective story that unfolds in the streets, cafés, cabarets, museums, abandoned

factories, and grand hotels of Paris. What happened to the missing sister? Was there a plot? Was she really kidnapped? Is she alive or dead? Is it in fact a case of mistaken identity?

Fetishistically boxed up in a retro attaché case are souvenirs of this curious tale: a rose, a mask, an Eiffel Tower statuette (perhaps a murder weapon?), a booklet, a DVD, and of course the photo book itself. Invoke your inner detective: set the case before you, flip open the rusty latches, and devour the evidence… 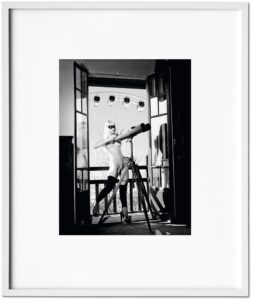